Out with the old and in with the new

The diversity of our garden rooms is amazing and we were particularly pleased with a recently completed project for our client Nick Tobin whose need for additional space was pressing.

Nick is a civil engineer for National Grid and has increased the hours that he works from home. The trouble was the house really couldn’t provide him with a dedicated work space and he didn’t want to leave his paperwork and laptop lying around to get in his wife Margaret’s way! 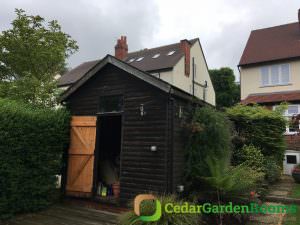 Jointly they decided to create a garden room as an office space and chill out area and they had the perfect site to the rear of the property. However it was occupied by a very large, solidly built, timber garage that was probably over 40 years old and in itself not a great sight to behold!

We designed the Tobin’s project to sit on exactly the same footprint as the garage. That’s when the fun began!  When the site was being prepared we found a very large wasp’s nest under the floor but luckily it didn’t hold up the demolition!

Being a keen gardener, Margaret was reticent about going ahead with the work at this time of year, having concerns about the garden plants, and whether we would cause a lot of damage – which of course – with our trademark care and attention – we didn’t! 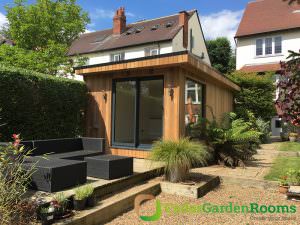 The fit out incorporated a kitchenette, with sink and fridge as well as a great area for Nick to work. We created a separate shed end to store garden equipment that had previously resided in the garage.

And the pièce de resistance?  We sound insulated the garden room as Nick likes to play electric guitar (loudly) as a pastime and now Margaret enjoys much more peace and quiet than she did before.

So everybody is more than happy with the outcome and relishing the new space in the garden!

You currently have JavaScript disabled!